WHAT OUR CLIENTS HAVE SAID ABOUT US

It is a  to work with such a professional team.  The project team did not miss a beat.

Work is progressing safely, efficiently, and professionally.  I have actually shared site photographs within the DDD practice at ERM as an example of what a well-run site should look like.

Everyone works as a team. Everyone takes pride in their work and in the site in general, picking up pieces here and there, tightening up the site, keeping it clean and professional. Add to that the professional skills and pleasant attitude. This is a team to be proud of.

I hope we can finish the project with the team at hand and put a safe and successful project in the books that we can use for a launch pad for future projects between our firms.

I’d like to thank you for the unified, timely completion of the demolition and trucking activities at the MIT Garage Demo site on Vassar Street, Cambridge.  Both companies worked in concert to move over 14,000 tons of material in a synchronized and professional manner on a high profile site.  Finishing on schedule, in light of unexpected challenges, is a testament to JDC and is much appreciated.

Please extend our thanks to your entire Team!

I don’t pass out compliments lightly and I already complimented JDC on the professionalism of the JDC team for the Lantheus project a couple of weeks ago.

"I would like to commend your Company for sending out an outstanding crew. The Union Chandler Façade retention is a valuable asset for the MGM Casino site. It’s historical value to the city of Springfield was incorporated into the Casino project by the Springfield Historical Society. Your crew under Foreman Todd Arsenault, including Paul Palmerno, Nicholas Pirella, Josh Pagels ,and Brandon worked as a team to accomplish the steel removal without any incidents or co-lateral damage. They all worked in a safe and professional manner.  I feel as though this crew deserves merits for a job well done. It has always been a pleasure to have JDC Demolition out here for demolition projects . I would certainly recommend your company for any demolition project in the future."

“Your team has been instrumental in the success of our Terminal E project at Boston Logan Airport and have been true professionals.”

"I would like to recognize your crew for the demolition of the 2 Skyway Pedestrian bridges here at MGM Casino site Springfield Ma..

The crew led by Todd Arsenault, with laborers, Craig Gerow, Mike McGrath, Gregory Alvarado, and John Welch did an outstanding job. The degree of difficulty was the tight area, limited work area and heights of the bridges. There was a large amount of hand demolition utilizing pneumatic rivet busters, adz work, and torch cutting. The superstructure’s were razed by hand down to the concrete decks. This work was completed in five days.

A 275 ton Hydraulic Crane was mobilized in on a Saturday morning with street closures and both decks were rigged  and taken out by 3 PM.

My feeling is the crew work hard, safely and professionally for this project to be completed in time without any problems. Protection was put out to protect components from co-lateral damage

I would recommend JDC Demolition Company for any demolition work I am involved in. Thank you once again for having provided the right crew to complete this difficult project.

"The demolition of the Union Chandler building was a huge success, due to the constant attention Mike Amedeo (Foreman) gave his men. The arduous task of separation from the roof to the basement creating a trough was completed in a safe manner. Mikes attention to detail, safety, and experience was needed on this project.

Patrick McDonough lead the way along with additional manpower,  made the trough in short time. All work done was completed safely without any problems.

John Kennedy Operating Engineer operating the Volvo High Reach with precision and accuracy made the demolition of the remaining building a huge success. His ability to sort and separate the demolition debris were noticeable as waste streams left the site for disposal. This certainly helped with your trucking and disposal cost. It also reflects in our LEEDS program.

JDC certainly provided us with the A-Team.The project was completed a week ahead of schedule and that was much appreciated as it opened up an area needed for the construction of the MGM hotel.

I will look forward in working with JDC on another Tishman project in the future. I will also recommend the hiring of JDC at any time by recommendation to any company". 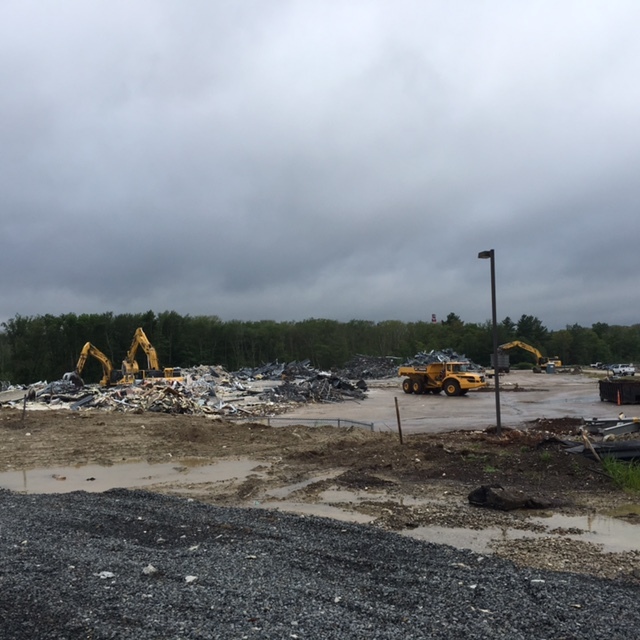 "I would like to acknowledge the professional job your company employee’s did on our project at MGM Springfield.  I commend Operating Engineers Bobby McClean, Steve Demello, Jerry Lutz Jr. and Roy Delprete. as well as to you Laborers Pat McDonough, Mike McGrath and John Amedio.
Your Foreman Mike Amedio did an excellent job maintaining, trucking, manpower and knowledge for the demolition of the various structures.  Sonny Lee in the background provided timely paperwork, permits, and support to complete all phases on schedule.  Your company was a pleasure to work with and I personally would like to have JDC Demolition on future projects."

"In 2013, Footprint Power RealCo was searching for not only a demolition contractor but also a partner to decommission and demolish the Former Salem Harbor Power Plant. After several interviews with other contractors, Footprint decided to forge a relationship with JDC Demolition Company Inc. There were several unique aspects with this project that JDC was able to handle and keep our project objectives at the forefront of the overall schedule and to clear the way for the next phase of development. JDC has demonstrated a level of safety, planning and execution that is second to none in the demolition and abatement industry."

"Chad (we) just wanted to let you know that Dave Ackerman and your crew did an excellent job on the auditorium at Salem High School. The owner and Harvey construction are very pleased with the work (you completed)."

"I wanted to be sure that the crew that performed the pier 8 night demolition at Terminal E is recognized for the safe, efficient job they all did in dismantling the pier 8 structure. Working all night in cold windy conditions, this crew, supported by Ken Desruisseau and Mark St. Pierre, and the JDC labor crew, consistently performed this operation in a positive manner, despite a few obstacles. As the Suffolk project safety manager I appreciate the safe, hard work this crew did."

'Thank you, Brian Arcand and Mike Clarke for all the efforts with Marty (engineering) on the wall calculations and bracing, as well as the time spent to price and coordinate the steel bracing design (on the Massachusetts Institute of Technology 2nd Century Project). Overall, I think we are all much happier and more profitable by not having to stop the demolition sequence to install temp bracing. I wanted you to know that the effort on the front end doesn’t go overlooked."

"While your crew was performing demolition on the Prudential Center entry, they began dismantling the existing fire protection lines within the area and found one of them to be live, causing significant water flow within the area. Water entered the Gucci store and things were chaotic while everyone worked to get the water flow stopped and control the potential for damage. The area where the work (was) being performed has an active emergency egress path through it. The crew immediately cleaned the area to allow for anyone to pass through to do so safely. Before anyone would have needed to safely pass through, they had all jumped in and made the egress path immaculate. The efforts were so swift and impressive that Mark Denman commented on it himself several times, it was impressive.

I am sending this to you simply to tell you how well they did. As we both know, the majority of the time we get a call, email or letter in this business it usually is not with good news (especially on Friday afternoon!), and I thought you would want to know that out here today, your team got everything right at a critical moment.

Thank you and well done!"